Cyrene, a bio-based solvent as replacement for NMP, DMF & DMAc

The biobased solvent Cyrene was previous discussed in an article regarding solvents but deserves a little more attention for its unique characteristics. Cyrene is developed by the Australian based Circa group and originates from their platform molecule: Levoglucosanone.

Synthesis and properties of Cyrene

This molecule is produced in a patented process from cellulosic waste material originated from paper production. Currently, the subsequent reduction of the LGO is still done via metal catalysis, although enzymatic options are being explored and seem certain to be used in the future. 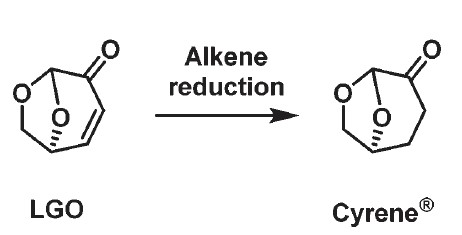 Since 2018 Will & Co is supporting the Circa group in distributing this biobased solvent across Europe and recently plans to build a >1000 mt flag-ship plant have been initiated. End of 2022 this plant is fully operational with large quantities of Cyrene becoming available to the market.

Based on its Hansen parameters, Cyrene shows a lot of similarities to reprotoxic solvents such as NMP, DMF and DMAc. For many applications, these solvents already have been banned and it is expected that these can only be used in exceptional circumstances. Opposed to these three reprotoxic solvents, Cyrene has little labelling and is not reprotoxic.

Already Cyrene has proven itself in replacing these labelled solvents in many applications such as nutraceutical extractions, pharmaceutical synthesis, graphene, polyurethane dispersions and dissolving dyes for example.

Cyrene is a cyclic ketone and as such is poorly resistant to strong bases. In their presence, it will quickly dimerize, ultimately forming insoluble polymers. Against moderate acids it is stable, observing now effects in trifluoroacetic acid, while strong acids such as 2M HCl result in Cyrene forming a complex mixture of derivatives. Cyrene reacts violently with a 30% hydrogen peroxide solution.

As a new biobased solvent Cyrene chemistries have not been fully explored yet. It has however shown useful as a drug precursor, a solvent in many chemical reactions such as Sonagashira and Suzuki couplings as well as in amide formations amongst others, as an excellent solvent for graphene dispersions and dye dispersions and in various coating applications.

Are you looking for a biobased solvent or replacement solvent for NMP, DMAc or DMF, please feel free to contact our product manager

For a more extensive list of research done on Cyrene, please visit the website of the Circa group: https://circa-group.com/cyrene

This website uses cookies to improve your experience while you navigate through the website. Out of these, the cookies that are categorized as necessary are stored on your browser as they are essential for the working of basic functionalities of the website. We also use third-party cookies that help us analyze and understand how you use this website. These cookies will be stored in your browser only with your consent. You also have the option to opt-out of these cookies. But opting out of some of these cookies may affect your browsing experience.
Necessary Always Enabled
Necessary cookies are absolutely essential for the website to function properly. These cookies ensure basic functionalities and security features of the website, anonymously.
Functional
Functional cookies help to perform certain functionalities like sharing the content of the website on social media platforms, collect feedbacks, and other third-party features.
Performance
Performance cookies are used to understand and analyze the key performance indexes of the website which helps in delivering a better user experience for the visitors.
Analytics
Analytical cookies are used to understand how visitors interact with the website. These cookies help provide information on metrics the number of visitors, bounce rate, traffic source, etc.
Advertisement
Advertisement cookies are used to provide visitors with relevant ads and marketing campaigns. These cookies track visitors across websites and collect information to provide customized ads.
Others
Other uncategorized cookies are those that are being analyzed and have not been classified into a category as yet.
SAVE & ACCEPT